What? Me Worry? Isch ka Bibble and Alfred E. Neuman

What? Me Worry?   Isch ka Bibble and Alfred E. Neuman

In an earlier post, I point out that the Alfred E. Neuman face and catch phrase originated from the advertising poster for The New Boy, a stage play that was first performed in 1894.  The changes in the wording of the original phrase from “What’s the good of anything? – Nothing!” to “Me-worry?” and “What – me worry?” may have been further influenced by the “I should worry" craze of the  early 1910s. 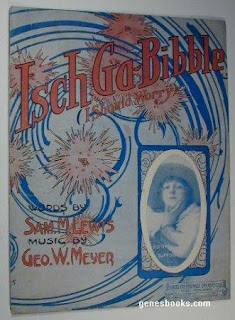 So say the lyrics to a hit song from 1913, Isch Ga-Bibble (spelling from the published sheet music; Isch ka Bibble as spelled on the record label of the recording by Ed Morton), words by Sam M. Lewis, music by George W. Meyer.  The song introduced the faux Yiddish gibberish word, ‘Isch ka Bibble,’ in all of its variant spellings, into the public lexicon.  The phrase would reappear in the 1930s as the name of a comic character on Kay Kyser’s Kollege of Musical Knowledge radio program.  Isch ka Bibble’s English language ‘translation,’ “I should worry,” entered the popular lexicon in an even bigger way.

The Washington Herald (March 26, 1914), published a story about an investigation into Isch ga bibble by the Washington DC correspondent to the Cologne (Germany) Times:

“Isih ga bibble?"  “Whaddyemean.  'Isch ga bibble?’” asked the Germans who live in Germany when American tourists "pulled" the phrase during their wanderings in the fatherland.

"It's German," responded the tourists.  "Don't you know your own language?"  Now, Germans, as everyone knows, are a serious-minded people.  So they began to think that maybe they didn't know German after all, and grew worried about it.  As the tourists journeyed the phrase spread, and pretty soon the whole empire was wondering about "Isch ga bibble."

Finally, a German newspaper decided to settle the question, once and for all.  So the other day Dr. George Barthelme, Washington correspondent of the Cologne Gazette, received a terse message from the home office, something to this effect: "Probe Isch ga bibble. Americans here call it German.  Rush details."

“I should worry,” remarked Dr. Barthelme, reading the message. Thereupon
he got busy.  Success crowned his efforts. Last night he sent a story back home telling all about it. Here is what he found out:

There is a saying common among German Hebrews meaning about the same thing as "I should worry " The saying is: "Nlsch gefiddellt." In a Hebrew theater In New York one of the comedians "put across" the line.  An American song writer in the audience heard it, didn't understand the correct pronunciation, and wrote It down the way it sounded to him. "That's the way it ought to be. anyhow." he remarked. So he wrote an "Isch ga bibble" song and It went all over the country, and everybody shrugged their shoulders and said "Isch ga bibble," and It got back to Germany that way.

And now that Dr. Barthelme has found out what it's all about the German mind will be relieved and everybody will be happy, and will say- "Just like Americans, nisch gefiddellt", and the Americans will keep right on saying "Isch ga bibble."

Whether a ‘mistake’ or intentional, the word stuck and helped elevate “I should worry” into a national craze.

“I should worry” seems to have been an example of what we would now call a meme.  It was considered a dismissive, sarcastic, snarky remark, along the lines (as best as I can tell) of today’s “yeah, whatever” or “I could care less.”  Although the "I should worry" fad seems to pre-date the song, the song lyrics illustrate how the phrase was used and may have helped propel the craze even further.

The following cartoon from The San Francisco Call (August 10, 1913) also illustrates how the phrase was used and how it was viewed by more conservative members of the older generation: 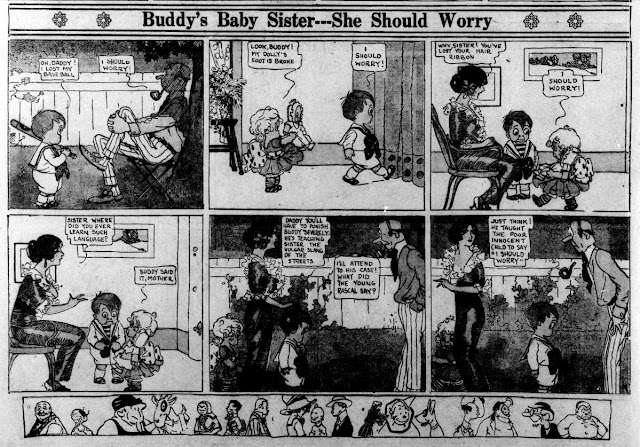 Then, as now, there were fuddy-duddies who resisted pop-culture.  The Day Book (January 17, 1914) reported that “Mrs. W. J. Zeh, president of the Perboyre Art and Culture club, wants to abolish the phrase, ‘I Should Worry.’”  She was looking for young people to suggest suitable replacements for the phrase.  The reporter, on the other hand, suggested leaving the phrase alone to die a natural death like the earlier fads, “Oh, You Kid” and “For the Love of Mike.”

A travel writer reported that:

London’s hotels and lodging-houses are filled to the skylights with blooming Yankee tourists.  Never before has the city welcomed more travelers who say, “I should worry” and gnaw pepsin gum and demand the baseball scores by cable.

But not everyone was so negative.  Glinda, the Good Witch of the North, for example, approved.  Billie Burke, who later played Glinda in the 1939 movie, The Wizard of Oz, was quoted as saying:

I think the man who invented the slang phrase, “I should worry,” almost deserves a Nobel prize.

The mere fact that almost everybody in the United States is saying this little derisive sentence over and over to themselves daily is a sure sign that a great many of them will begin to understand that worry is the most foolish of all the unnecessary things with which women torture themselves.

The Day Book (May 20, 1913).  Dr. L. K. Hirshberg of Johns Hopkins University agreed with the Good Witch; he prescribed repeating “I should worry” fifty times daily, loudly and with conviction (increase dose as needed), as a cure for chronic worry.  The Salt Lake Tribune (May 11, 1913).


The “I should worry” meme was repeated in many different variations:
She Should Worry - The San Francisco Call (August 10, 1913) 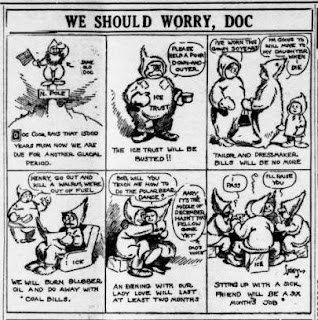 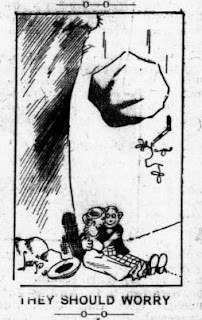 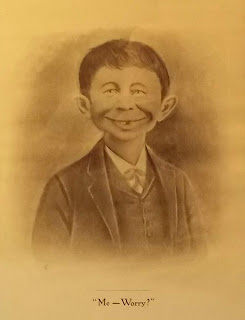 Harry Stuff filed for copyright protection for his "Eternal Optimist" or "Me - Worry?" image in 1914, at the height of the "I should worry" craze.  Although the image was likely based on or inspired by the earlier poster for The New Boy (as discussed in my earlier post), the rewording of the phrase to "Me-Worry?" (or "What? - Me Worry" as it appeared in later iterations of the image) seems to have been influenced by or was part of the "I should worry" craze of the early 1910s.


(Watch a two-minute (or less) summary of the History of Alfred E. Neuman - click here.)
Posted by Peter Jensen Brown at 12:22 PM